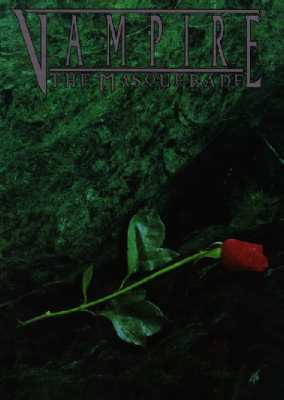 A World of Darkness

It’s too bad the Vampire mythos has been reduced to the tween paranormal romance genre recently: they are one of the best monsters ever created, far more interesting the zombies of our current pop-zeitgeist; Unlike faceless hordes, Vampires manage to maintain a strong element of tragedy even when breaking our strongest taboos. Despite their threat to us, we ultimately root for the vampires for Vampires need not be monsters by nature. The Camarilla’s traditions that demand Kindred hold on to their humanity prevents the killing of innocent mortals, and the local blood banks are happy to sell to vampires. The reason they hide from is the same reason we reject them - fear. Instead a parallel world is created in image of our own society - the World of Darkness.

The player’s slow descent into the World of Darkness feels completely natural: while Kindred must sleep during the day, the sun never intrudes into the game - time is abstracted into the same night or sessions of play. By removing the threat of the sun, we forget that the normal world exists, and are subsumed entirely by the World of Darkness.

And a world of darkness it is! Like the protagonist, all of the good has been stripped out of LA. Almost everyone you interact with is at best a sleazeball if not a criminal. Prostitutes, transients, and thugs dominate the street. The only “normal” people are goth clubbers from the outer suburbs, a commentary on the obliviousness of the MTV generation to true suffering. Even human law enforcement seems to care little for what you do, putting in the bare minimum of effort to find you after you commit a crime. Bloodlines has fashioned a mirror image of our society that isn’t complimentary.

In the beginning, the fledgling vampire is mostly human, albeit with a insatiable desire for blood. The plot reflects this; many of the quests in the Santa Monica zone allow the player to save lives or help those in need. The player only resorts to violence in self defense, or protects others from true evil. Even if most people here are somewhat sleazy, they aren’t so bad: Mercurio is a decent and loyal friend, even if he is a criminal and a servant of LaCroix. By far, most of the Kindred you are introduced to welcome you to their world, even when they are taking advantage of you. Not until LaCroix enters the scene to protect the masquerade do you take monstrous actions.

And yet, for all the good the player does in the beginning, it is often twisted later on. The ultimate example of the universe conspiring against your goodness is Heather Poe, who you can save at the beginning. Later on, she begs to become your ghoul, and is difficult to turn away. And yet, once she becomes your ghoul, all of your options are to treat her like shit, and she is eventually murdered by the Sabbat. If you turn her away, she kills herself. The World of Darkness laughs at your feeble attempts to fight it.

And this does not only apply to supernaturals: the humans on the periphery of the World of Darkness are inevitably taken into madness and despair until their eventual deaths. The Giovanni clan, for example, mixes Kindred and Kine freely, with members competing to be the family’s next top vampire. To the outside world they are a respectable family; on the inside, they are mixture of incest, intrigue, and violence. Walking into a locked room in their mansion one can find a mortal sharing a bed with a dead prostitute, while the family patriarch schemes to use the Ankaran Sarcophogus to raise an army of undead in LA. But there are mortals who, knowing of the World of Darkness, choose to fight against it. Perhaps they are the heroes we need? Of course not; Bach, whose faith in God is powerful enough to fight Kindred alone kills his own for disobeying his orders. In the world of Darkness, the only true difference in Kindred and Kine differ is how much damage they can do.

And if humans can descend into evil, Vampires can retain much their goodness. Some of the best denizens of the World of Darkness are found in the Anarch faction. While still holding mortals in contempt, and suspicious of anyone outside their clique, they have a heart of gold under their gruff exterior. Admittedly even the nicer ones tend to do terrible things, but their actions tend to be done in a way to preserve their humanity. Does this contradict my thesis? I think Bloodlines tells us is possible to fight the darkness that Kindred refer to as the Beast. However, that is not to say it is easy to do so; In the game, there are far more opportunities to lose humanity than to gain it. The moral system of Kindred is not truly about the Camarilla/Sabbat struggle - it’s about opposing the universe’s desire to consume your soul.

This moral system is the aspect I admire most about Bloodlines. It has consequences that matter, in story, and to the player, but also avoids moral choices that are a calculus of what will make the player most powerful. Rather than the angel vs sociopath choices most games provide, there is genuine ambiguity in the situations you are put in. The game will always provide you with rationalizations for your actions, and it is easy to feel justified by them. It show us how easy it is to think yourself good while doing great evil, and shows us the difference between good writing in games vs mediocre. Role playing games could do much to learn from Bloodlines

Some have criticized Bloodlines for forcing the player into combat in some quests, but it fits in perfectly with the setting. While one can wear the facade of civility, at the end of the day power is won only through violence. By forcing the player to fight, the player is forced to face this truth.

In this form, the World of Darkness is a nihilistic Other, consuming the goodness of its inhabitants before their Final Death. The only Kindred who empirically examines vampire traditions is insane, and it is implied that his skepticism is simply another manifestation of Malkavian madness. No wonder kindred cling to superstition and rumors - truth is meaningless in the World of Darkness. And yet nobody thinks to blame the universe itself, preferring to fight each other. Even if they try to hide it behind a facade of hedonism and false bravado, Kindred are a truly self-loathing group. Perhaps Kindred should look forward to Gehenna: a chance to rid themselves of the curse of Caine and leave the world of darkness behind forever.