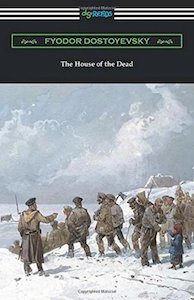 The House of the Dead


After some initial literary success, Dostoevsky joined a group called the Petrashevsky Circle, which was anti-tsarist and set up a printing press espousing some of their views. He was arrested and sentenced to death, but was granted a reprieve at the last minute. Instead, he was sentenced to four years’ prison and six years of exile. After being allowed to return to St. Petersburg, Dostoevsky published The House of the Dead as a description of prison life. Because of censorship, he publishes it simply as a factual description of prison life but it’s clear the Dostoevsky is against the institution and considers it cruel. And yet, what does one do with murderers?

The House of the Dead is the OG prison novel, and defines all of the tropes that we see in television shows like Oz or Orange Is The New Black. There’s the shower scene (the baths), the escape, the prisoners rise up against the authorities, someone gets shivved. The food is black bread and cabbage soup with cockroaches in it, unfit for human consumption. The only thing missing is the homoeroticism of future prison works.

The novel doesn’t have a real plot, but it’s framed as notes about prison life by a nobleman convicted of murdering his wife in a fit of jealous rage and is sentenced to 10 years in prison. Because of his noble status, the narrator is not initially accepted among the convicts – he is considered too soft to do real work, and to have nothing in common with the peasant class. He has to learn to adjust to prison life even as he’s not “one of them”.

There’s not a lot of regret among the prisoners for their crimes. Prisoners rarely talk about their pasts or reflect on their crimes, and the narrator has to do a lot of prodding to get the stories of the inmates. Some insist they were justified in their crimes, or innocent on a technicality. Dostoevsky thinks prison just punishes and withers the soul of the inmates, rather than reform them.

The prisoners themselves are mostly a pathetic lot. They quarrel and commit petty theft against each other, though actual violence is rare. Because of stealing, money is spent almost immediately, but it is still valuable - most of the prisoners have some kind of side hustle to make money, from making clothes to playing music. One prisoner even has veterinary practice. Money can be spent on better food or on prostitutes, but alcohol is the most desired good in the prison. Dostoevsky goes into detail on how it’s smuggled into prison (through ox intestines) and the process of diluting the vodka so the seller (“barman”) maximizes his reward. Prisoners will save up money for a year only to spend it all on a single night of drunkenness.

Dostoevsky thinks money is valued by the prisoners more than by civilians because it’s the only source of control and freedom in their lives. The prisoners also look forward to the few times a year they are treated like regular people – the feasts of Christmas and Easter. During this time, they are given rests from their labors and have a feast with quality food. During Christmas, the prisoners put obsessive effort into their play, and take a great deal of pride when the protagonist gives it a better review than the plays of St. Petersburg.

The primary way of punishing prisoners is corporal punishment – referred to as “the sticks”. Punishments start at 100 lashes for minor infractions and can go up to 5000. One prisoner is killed during his corporal punishment, and some sentences require multiple phases to allow the convict to recover in the hospital. So 5000 lashes might be divided into sequences where the prisoner is given 1000 lashes and taken to the hospital, only to be given 1000 more lashes when he recovers. It’s implied the Major in charge of the prison is particularly vicious in corporal punishment - he’s eventually fired from his post for cruelty. Some of the executioners are also sadistic, pretending to show mercy on the inmate or making the prisoners run while receiving their beatings. The only executioner who is respected is scrupulously fair, but he never shows mercy either.

The author notes that the most dangerous men are the ones awaiting their punishment, they might stall the day of punishment by committing another crime (which requires a new trial). One nearly kills the major in an attempt to avoid punishment, but is thwarted at the last minute.

The author notes that the work itself the prisoners do is not as hard as what a peasant would have to do to survive in Imperial Russia. It is bad not because it is hard, because there is no choice in doing it. Worse is that you are forced to spend time around people you find disagreeable, “Hell is Other People”. The worst part of prison, however is that it withers the soul:

It’s interesting to think of this in contrast to how Raskolnikov in Crime and Punishment experiences prison. He starts to free his soul under Sonya’s love, but what would have happened to him if he didn’t have her loving care?