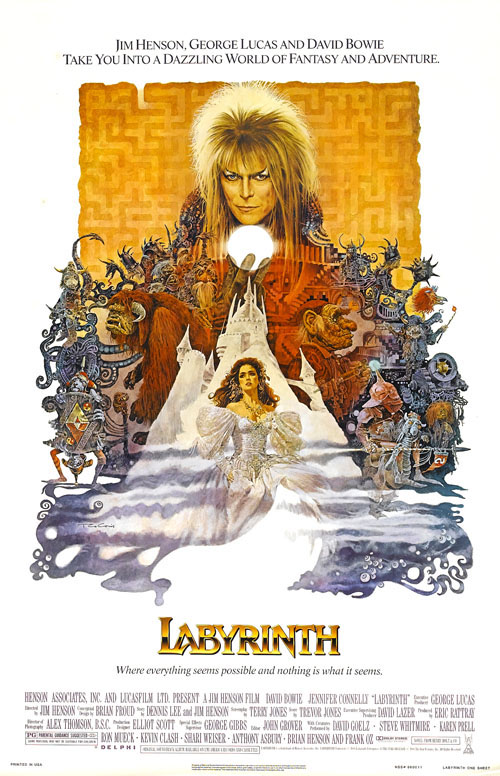 Labryinth is one of the few films made for a generation not yet born. It’s supposedly a children’s film, but it bombed in the box office only to become a millennial cult classic. It has most of the things that were successful about 80s pop-cinema, or at least the things we thought we liked about it. The puppetry is done by Jim Henson, music by David Bowie, and liberally uses the tropes of children’s fantasy from the period. And yet, the tropes presented here are cynically reinterpreted through mass media spectacle, capitalism, and Freud. The standard fairy tale is twisted into a teenage girl’s masturbatory fantasy while acknowledging the magic that made us fall in love with the genre in the first place.

Labyrinth is not really a children’s film, but masquerades as a children’s fantasy, a vision of false nostalgia: a movie that no Gen Xer who the movie was made for watched, but the millennials they had did. The false nostalgia allows children to grow up with the film; Each viewing gives the growing child a new perspective on the film each viewing. Rather than being a fond memory, the film grows with you, reinterpreted with each viewing. It’s the best kind of coming of age film; You only realize it’s a coming of age film after you grow up. Labyrinth could only be successful in a world that permitted multiple viewings of the same film; The 80s were not quite there yet.

At the most superficial level, the film parodies other fantasy films from the time period. The film has a surreal lack of context - big-lipped alligator moments abound, and basically has no beginning, ending, or even transitions. It feels as if Henson had put together some muppets ideas that never took off and paid lip service to balding a coherent whole. And yet, where most films would suffer for it, it makes Labryinth a great cult film rather than a forgotten relic of the past, such as its predecessor. It’s a film for the social media era, able to be chopped up and redistributed in the form of youtube videos and image macros.

Fortunately for social media, the meta-context of is as deep as the context is shallow. The movie takes a great deal of inspiration from another pop-culture favorite, The Wizard of Oz. A young girl, transported from suburbia to another world by a great wizard, and then faces challenges by said wizard, then goes home (did it really happen?) However, it is an 80s Wizard of Oz - a power fantasy rather than a moral fantasy. Where Oz opposes Dorothy, the Labyrinth actualizes Sarah. Sarah is not Dorthy; she’s selfish, hates her family, and resents doing anything for others. The world exists entirely for her benefit, her friends are loyal only to her, adore her, and do whatever she asks. The challenges she faces are suitably dangerous, suitably safe, and suitably erotic. She even lacks the originality to come up , and recites a play in her head. Her friends are incredibly flawed, but only ever acknowledges her virtues.

No discussion of Labryinth would be complete without discussing as a vehicle to adolescent sexuality and sexuality. I don’t plan to discuss the fan theory of Sarah being molested as a child, though I consider it a valid interpretation of the film. Rather, I am interested in Sarah’s discovery of her sexuality and the conflict between the dominant and submissive desires of Sarah’s subconscious.

Most of the film is standard children’s cuteness - the monsters are a cute sort of ugly and never truly threatening to Sarah. Sarah does not feel fear unless she is in the presence of David Bowie. It gives a fundamental lesson about life; that fighting monsters is easy, kid’s stuff, it’s only once one is introduced to the adult world of sexuality is terror is truly real. The goblin king is constantly seen with sexual symbols (the crystal balls and staff, not to mention the padding) David Bowie is an attractive man, and his costume leaves little to the imagination. I’m sure many youngsters experienced their entry to adjacent sexuality through attraction to him. It even comes with a dominance/submissive fantasy, introducing kids safely to the world of sexual kinks. She even has a safe word, “You have no power over me”. It provides adolescents a safe world into sexuality by linking with a children’s fantasy; They can ignore the sexual aspects until they are ready.

However, once the adolescents grow up, the film is viewed ironically; We now see how absurd the metacontext is. In this final iteration, Labyrinth dies - no longer magical, but a joke. It fed our delusions and sexual desires, as children, but watching it from a more mature tears that perspective to shreds. In a sense, we put our childish things away and leave the film behind. David Bowie has no power over us.