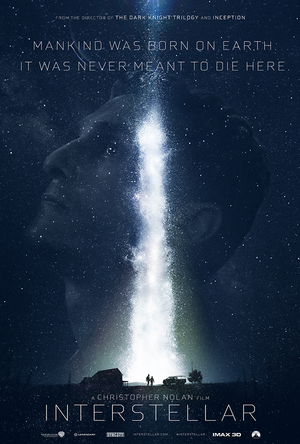 After a mild equivalent of a space winter post-Apollo, the world is getting excited about space again. Spacex, mars colonization, and fears of extinction have stimulated the public’s imagination for space exploration again.

Enter Christopher Nolan’s Interstellar, where a few brave astronauts are responsible for finding humanity a new world to settle. When viewing the film it is impossible not to be reminded of Kubrick’s 2001: A Space Odyssey. Interstellar’s plot structure is basically the same as 2001, broken into 4 acts: discovery of a secret mission to explore space, exploration of a new frontier, followed by an act III betrayal, and a spectacular but confusing conclusion. It would be easy to call Interstellar an updated 2001. However, despite the superficial similarities in genre and plot, the films have very different perspectives on human nature and our place in the universe.

2001’s vision of the future is a modernist technological utopia, where everyone can (and does) live an upper middle class lifestyle. The United States and Soviet Union cooperate peacefully on space missions, and as far as we know the world is a plentiful utopia. The only hint of problems is an epidemic on the Moon, but it turns out to be a ruse; In fact, humanity has done so well that an alien benefactor has decided to let us evolve. In this vision, progress is destined; Humans overcome their bestial nature through technology, with divine guidance at appropriate moments.

Interstellar takes a decidedly more cynical view of humanity. A disease has wiped out most crops, wars over the food left has killed billions of people, and environmental disasters are making the earth uninhabitable. Even worse, it is implied that most of these are caused by the excesses of industrialized economies in the 20th and 21st century. We may be able to build television screens, airplanes, and satellites, but morally we’re still 2001’s apes, driven only by our base desires.

However, while most of us losers are destined to suffocate on our own wastes, a few enlightened beings have the vision to save humanity. People are so anti-intellectual now that this work must be carried out in secret, lest the rest of us discover the truth and devote scarce resources to our desire not to starve to death. Interstellar’s antagonist is not a person, but our selfish desire to survive as individuals. This is best illustrated in Dr. Mann, NASA’s fallen Lancelot. He is described as the best of humanity, believed in the mission, and understood the risks of the mission. In the end, he couldn’t stop himself from betraying the mission; If he fell in that situation, who wouldn’t?

Though our instinct to survive is the antagonist of Interstellar, our desire to save our loved ones is our salvation. Dr. Amy Brand’s instincts to save Edmunds is vindicated, and the plot’s act IV paradox is resolved through Cooper’s love for Murph. The film rebukes NASA’s decision to choose the first astronauts based on their lack of family; Perhaps if Dr. Mann had had attachments to earth, he would have been willing to die for their future, rather than try to save himself. Nobody can sacrifice themselves for humanity, but only out of love for the people in their lives.

2001’s antagonist, in contrast, is a computer, an “other”, but its motivations are the same as Dr. Mann’s: survive for the sake of the mission. In fact, after comparing the casts of 2001, I understand why I find 2001 so sterile - HAL is the most human of any character in the entire film. Everyone else is remarkably cold and inhuman - no back story, no emotional attachments to earth or even each other. People are able to cooperate peacefully mostly because they’ve ascended past the petty drama that we can relate to. In 2001, our salvation is technology; Evreything anyone could want is already provided for, while strife between the apes is caused by conflict over scarce resources. 2001 sees survival as purely an engineering challenge - humans vs. the environment. Interstellar, however, believes that survival is a moral battle. It’s a difficult challenge to answer, as it requires us to work to save ourselves, and no higher being will save us. But even if Interstellar only has hard answers for us, it gives us something far better than a guaranteed utopia - faith in ourselves to build that utopia.