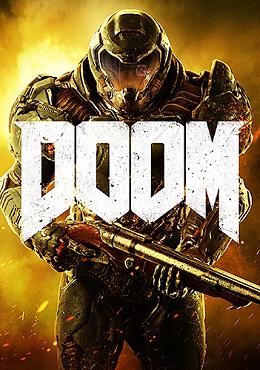 Redefining the shooter's past

One of the things I like the most about franchised media is how it can continuously be re-invented and reinterpreted for modern times and audiences, while remaining true to its myth. How many times have superheroes been reborn, shakesphere redone, and classic literature retold? However, rebooting a video game franchise is a sign of trouble: a quick look at the wikipedia list of reboots is a graveyard of once great franchises with lackluster sequels. I’m happy to say that DOOM (2016) does not fall into this trap.

As a teenager, I loved id Software’s games. I didn’t have a computer that could play Half-Life 2, but it could run Doom and Quake. I admired John Carmack, a brilliant programmer, and obsessively studied the source code of id’s games. Doom was the first game where I could understand what was going on, from the multiplayer to how textures were drawn on the screen. Each id software release built on the technologies of its predecessor; my knowledge of Binary Space Partitioning in Doom helped me understand the polygons of quake, and knowledge of Quake’s polygon rendering helped me understand the Quake II lighting system. In high school, I lived and breathed Doom and Quake, to the point of finding communities that still modded and played these games online. The open-source ideals of the game engines led to me getting involved in FOSS, turning a time-wasting pastime into a career.

But if the FPS defined my childhood, I’ve outgrown it; I am absolutely tired of the genre. I feel that I’ve played enough Call of Duty and Bioshock style AAA shooters for my lifetime. I’m tired of the casual violence, tired of the superficial plots, and most of all, I’m tired of how much the same every title feels. I didn’t expect to play another shooter in my life, until Valve released another Half-Life title. However, when I saw a friend playing DOOM I knew I had to play it. DOOM breathes new life into the genre and reminded me why I loved those games to begin with.

Ironically, DOOM’s predecessor, Doom 3 was one of the shooters that turned me off the genre. While I enjoyed it, it tried too much to be System Shock 2 than Doom. While a legitimately scary game, it suffered from trying to make a game about massacring demons into an epic. I understand why id needed to make Doom 3 what it was; At that point in the franchise, id had not released a game in five years, and a true single player game in seven. In the meantime, the genre had made great advances in graphics and gameplay without id’s influence. Half-Life scripted events, Unreal created an engine more beautiful than id’s, and Counter-Strike revolutionized online play. Unfortunately, Doom 3, while a solid horror game, was not the revolution it needed to be; it was barely able to catch up to it’s contemporaries.

DOOM, fortunately, learns from the mistakes Doom 3 made. Where Doom 3 imitates the competition, DOOM innovates on it’s own terms. It’s not Half-Doom, or Doom of Duty. It takes everything about Doom’s and Quake’s gameplay that made it stale, and breathes new life into it. Design elements that no FPS has had in a decade are brought back to the forefront, updated to fit in with modern technology. DOOM proves that the mechanics that defined id’s games, such as health packs, secret walls and mazes- were never artifacts of bad design or limited technology, but design decisions that were fun in their own right. One of the best levels of the game, “The Foundry” is straight out of classic Doom, a find-the-keycards maze. Of course, the foundry is not merely a Doom level - for one thing, they now feature objectives, rather than reaching the exits. Id takes advantage of truly 3D environments, and makes the shape of the level similar to a skyscraper - it requires jumping from platform to platform while lava runs underneath your feet. One small misstep and you will meet a fiery doom. Instead of being lost in a maze of walls, the maze is defined by where you can go - and requires you too look. It is far more satisfying to jump through danger to get a key card than wander through a labyrinth of identical rooms. In a genre dominated by single-path worlds, getting lost in a level was a breath of fresh air.

###Meeting the enemy At the end of the day though, DOOM is about slaughtering demons by the truckload than exploration, and no shooter has delivered as satisfying a combat system as DOOM. It’s fast paced, less about cover than dodging fireballs, and is perhaps the first time I’ve found satisfactory melee combat in a first-person game. The most innovative feature of DOOM is the glory kill, a way to provide gruesome fatalities to an enemy compared to the clean murders of enemies in Half-Life 2 and Call of Duty. At first it seems like a gimmick, but it becomes a core gameplay mechanic, providing health . This gameplay element is a stroke of genius, for it allows health to be regained by killing enemies, rather than taking cover or searching for health. I never felt like I needed to reload a save or search for resources while playing.

And the enemies! I had missed the variety of enemies compared to other shooters, each with different abilities and strategies for dealing with them. Many games are content with 4-5 types of enemies, but DOOM provides a rainbow of demons, multiple unique bosses, and updates the demons of doom, starting with the Imp, to the Cacodemon. The Cyberdemon is back, and as terrifying as it was in the Tower of Babel. It’s not purely demons from Doom, however: A few new bosses and enemies are added, fitting in well with the existing rogue’s gallery. Even after wading through hundreds of enemies, the variety of enemies reminded me why newer, more complex FPSs felt stale quickly while Doom’s comparatively simple gameplay still feels varied after hours of play- there are a lot of permutations of enemies, keeping the combat fresh to the final level.

The classic id weapons, from the shotgun to the railgun are present, with enough variety to keep any fan happy. Weapons that don’t work as well in a 3D environment are reinvented while keeping their ideas the same. The biggest change is the chainsaw; It’s reinvented as an instakill weapon with limited fuel, but drops ammunition for other weapons. As an ace in the hole weapon, it’s well-balanced solution to a weapon that would otherwise be useless in 3D. Ultra-violence provides a satisfying challenge without being overtly frustrating, while the more masochistic can play on the nightmare difficulty. And DOOM also integrates modern shooter design elements into the classic combat system. Each level has a series of optional achievements that provide weapon upgrades. They are unique to the level, and show off the possibilities of the weapons and combat systems Everything classic about Doom is updated to be fun in modern times, and modern features are made to feel classic by putting the id touch to their design.

Doom was never about its story, and from the opening cutscene I hoped that developers decided they would not even try. I realize this is an odd opinion for a critic who believes narrative integral to any work of art, but Doom’s myth has little to work with, and was developed by a guy who’s quoted “Story in a game is like a story in a porn movie. It’s expected to be there, but it’s not that important.” You would think Doom is everything I would hate. But all things in moderation, and doom is the prefect antidote to a genre that often takes far too itself seriously. It’s hard not to be charmed by the mixture heavy metal, demons and toxic masculinity DOOM provides. And I think that’s a good thing - there are far too many games that try too hard say something profound and embarrass themselves

Sadly, DOOM doesn’t stick to it’s narrative roots, and the developers wrote has a story involving two scientists vying for power within the UAC. This slows down the game’s pacing for cutscenes that I cared little for. That’s not to say the cutscenes don’t work at all; I was sad when VEGA gave you instructions for how to self-terminate, and the kindness of Doomguy backing him up before destroying him. However, even if the story is better off forgotten, the world-building is spectacular. Union Aerospace is re-invented as a cult in an alternate universe worshipping technology created by harvesting energy from Hell. Doomguy is brought in from the old Doom universe, and has little patience - he often destroys technology rather than listening, creating some hilarious dialogue moments. I hope to see more of this passive world-building in id games, rather than explicit narratives. I think this is one of the most unique aspects of storytelling in video games - that it can tell a story through optional details, not just the main plot.

But even if DOOM isn’t perfect, it made me remember why I loved the genre that defined my childhood, and that counts for something.